WWII Vehicles – The Importance of Mobility and Transportation

If World War I was a war defined by immobility, stasis, and defense,
WWII was driven by speed of movement and rapid distances covered. 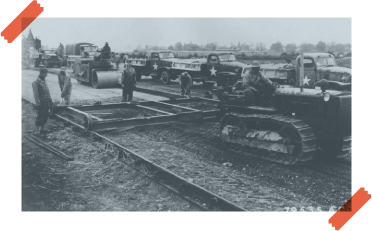 WWI can be categorized by the trenches, and by the minor advancements made at the cost of huge casualties. WWII gave the world blitzkrieg, and saw the German army reach Stalingrad and Paris in weeks, leaving defenders with little time to regroup. This speed was centered on moving troops quickly, and supporting them with rapid tank and artillery movements. The speed of the war was a deliberate strategy, particularly by the German army.

In the interwar years, despite prohibitions placed on the German military by the Treaty of Versailles, the Germans dedicated much planning to developing speedy vehicles.

The most famous of these is the tank, although armored cars, self-propelled artillery, and other transport vehicles were all designed with speed in mind.

As a microcosm of WWII, the German preparations for speed left the Western allies and the Soviet Union unprepared. The British in particular found themselves unable to compete with the German tanks in North Africa, and Britain never developed a tank that was of a comparable quality to those of other powers in WWII. Britain’s innovations came at sea, and they could never compete with the Axis powers when it came to the technology of ground warfare.

Later in the war, however, the quality of American WW2 vehicles, and the quantity of Soviet production both tipped the balance away from the Germans.

Unlike the war against Japan, which was predominantly fought at sea, the war against Germany was a land-based war, meaning that vehicles were at the heart of the action.

Tanks were first used during the First World War by the British and they are the most popular military vehicles.

Their name came from the desire to keep the new invention secret by labeling them as water tanks. The developments in the technology of the internal combustion engine, armor plating, and the desire to break the stalemate of trench warfare on the Western front led to their enthusiastic adoption by the British. The British minister in charge of supporting the tanks was the First Lord of the Admiralty, Winston Churchill. Most tanks came equipped with rocket artillery. 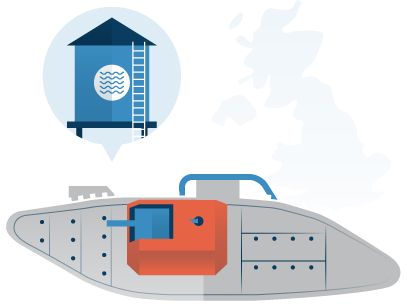 Despite the British invention of the tank, by the onset of WWII, it was the Germans who were more adept at using their ‘panzers’. Germany integrated their tanks into the blitzkrieg tactics in May and June 1940, using the speed and armor of the tanks to smash through the French defenses in their rapid advancement on Paris.

Tanks were capable of covering large amounts of ground each day, meaning that the Germans could smash through the French lines and force them into a near-constant retreat. The French were simply unable to mass their defenses to meet the German onslaught.

In North Africa, tanks were a key feature of desert warfare. The British initially deployed tanks such as Crusaders, Valentines, and Matilda models, all of which were lightweight, and designed to move quickly through the sand. However, this light armor made them more vulnerable to breaking down. Post-1942, the British army benefited greatly from the use of American-made Grant and Sherman-class tanks.

By far the most important tank battles of WWII were on the Eastern front, where the brutal and bitter fighting between the Germans and the Soviets extended to the battle between their tanks. Both were closely matched, and both fought extremely aggressively before the eventual superiority of Soviet resources won the day. 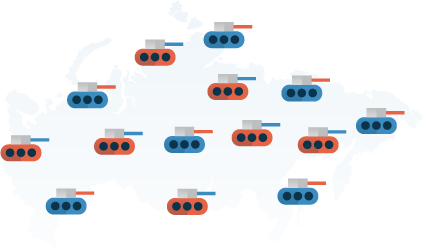 If I had known about the T-34,
I would have delayed invading Russia.

Such was the number of T-34s produced, that they are still being used in conflicts today,
most notably in the Libyan Civil War of 2011.

The Germans, by contrast, used the Tiger, which was a superior tank in terms of maneuverability and firepower. By the end of the war, however, the Germans were simply unable to compete with the numbers of tanks the Soviets could produce, and after D-Day, the Germans were fighting on two fronts, spreading their tanks too thinly.

During the interwar period, German Army strategists developed plans for the use of these iconic vehicles in warfare, imagining that speed of movement that comes with lighter military vehicles would help to avoid the stalemate of the trenches of the Western front.

They envisaged that armored vehicles would play the role of cavalry in historic wars: namely to provide mobile scouting in advance of an army’s movement. The British also used armored cars as scouting resources, particularly in North Africa. British armored cars were often driven by RAF pilots and played a major role in the early stages of the North African theater.

During WWII, the power and effectiveness of tanks led both the Allies and the Axis powers to develop armored car ‘tank hunters’. These armored fighting vehicles were also known as tank destroyers. The most famous of these was the American M10 Wolverine, used by the British as the ‘Achilles’. Towards the end of the war, the Americans began producing the M8 Greyhound.

The Soviets were able to produce the BA-64 by reverse-engineering a German SdKfz-221 scout car. The process from the capture of the car to the production of the BA-64 took six months, indicating the speed of the Soviet Union’s large production capabilities. 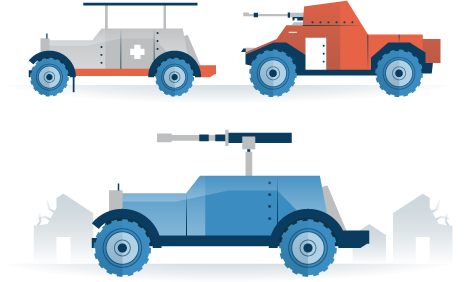 In the first six months of 1943, the USSR produced 1,000 of the BA-64, although due to their weaknesses against the German tanks, they were not considered to be suitable for front-line deployment.

Ultimately, during the war, the effectiveness of armored cars was limited by the success of tank warfare. So, they began to use them as reconnaissance vehicles.

Armored cars were less useful in reconnaissance than were planes, and were not able to defend themselves against counter-attacks. The German armored cars in particular took heavy losses on the Eastern front. Attempts later in the war to mount gun turrets on the cars, such as on the British Daimler Armoured Cars served only to slow the vehicles down, and to emphasize their inferiority in comparison with tanks. 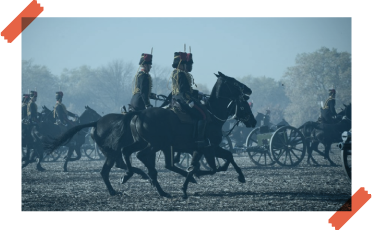 After WWI, many military strategists realized the need for mobile guns and artillery.

As the artillery got ever larger, it was more important to make them mobile on their own, without relying on them being transported by a separate vehicle. World War I artillery guns were pulled by a team of horses, which clearly was not sustainable for the mechanized age.

Throughout WWII, the Allied and Axis powers used their self-propelled artillery in different ways. On the Eastern Front, the Soviets and the Germans used their artillery to accompany their infantry, moving them rapidly around the battlefield.

By contrast, on the Western Front, the British and the Americans used their artillery in much the same way as in World War One, holding them behind the lines to support their infantry.

In the early months of American involvement in WWII, the U.S. military was forced to develop a mobile artillery gun under rapid speed and did so with a 75mm gun on an M3 chassis. However, when deployed to the field of battle, the 75mm guns were found to be insufficient to pierce the armor of modern war. As a result, the American military mounted a 105mm howitzer onto an M3 chassis, which resulted in a highly effective weapon with a range of 21,982 yards.

The most famous self-propelled artillery guns were the M7 ‘Priest’ guns, which were built by the U.S. These guns were so-called because the mounting of the gun on the tank chassis creates a ‘pulpit’ like appearance. These were used by both British and American troops to great effect in North Africa and the European theater. Around 3,500 of these M7s were built during the war. 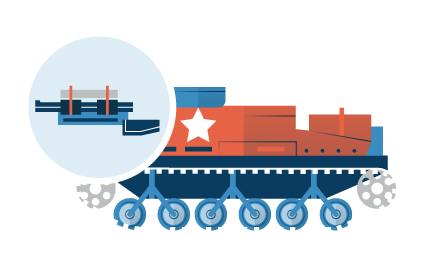 Despite the size and relative speed of these guns, WWII was also marked by a development in air technology. Planes were able to provide infantry support in a more effective and efficient way. This was a major feature of the German blitzkrieg at the beginning of the war.

Perhaps the most famous WWII vehicle was the General Purpose transport vehicles used by the U.S. military. These military trucks could be used as supply transport for medical items, artillery shells, and more. Maintaining secure supply lines is critical during war times.

Popularly known as the ‘Jeep’ as a result of the acronym ‘GP’, it became an iconic vehicle, easily identifiable even by civilians. 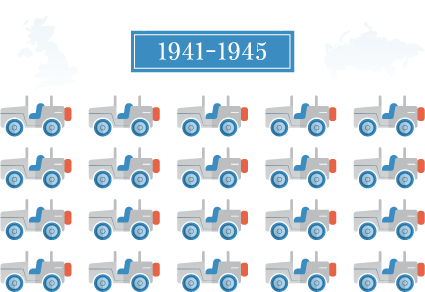 The success of the jeep came from its ruggedness. The small, four-cylinder engine was capable of around twenty miles per gallon and could carry either five soldiers or eight hundred pounds of cargo.

These vehicles were also four-wheel drive, meaning that they were perfect for cross-country driving. Jeeps were able to drive through territory and surfaces that other vehicles couldn’t, making them exceptionally valuable WW2 vehicles. Many military members and veterans still drive them today as their vehicle of choice. Here you can learn more about military and veterans auto insurance. 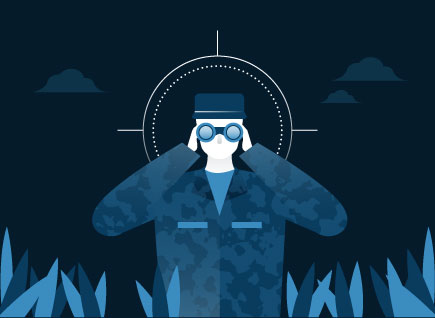 The speed and ease of use of a jeep meant that they were perfectly suited to reconnaissance and often worked closely in tandem with airborne regiments.
In 1944, all infantry glider regiments had 24 jeeps, and all parachutes regiments had 17. 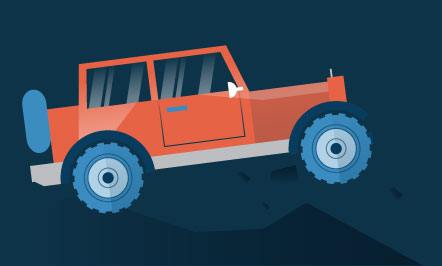 A testament to the success of the jeep and its influence on WWII is the report by Generals Eisenhower and Marshall. Eisenhower said that the jeep was one of the most significant weapons of WWII; Marshall described it as America’s greatest contribution to modern warfare. Jeeps are still used by armies around the world; their adaptability means that they are suitable for use in almost every type of climate and terrain. 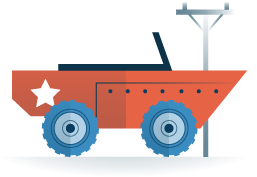 Amphibious vehicles, unlike landing craft, were designed with the goal of being capable of maneuvering on both land and water. Most commonly, the military will use amphibious trucks.

The United States led the way with the development of these WW2 vehicles, born of the necessity of
attacking Nazi-occupied Europe by water. 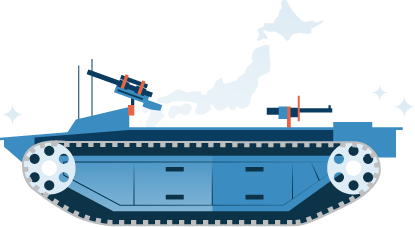 The Landing Vehicle, Tracked (LVT) was the first of these amphibious vehicles, developed for use by the Marine Corps. Although initially a truck capable of driving in water, the LVT soon became increasingly armor-plated and mounted with a 75 mm gun. The LVT was predominantly used in the Pacific War, particularly during the ‘island hopping’ strategy of the latter parts of the war against the Japanese.

One of the most famous and iconic amphibious vehicles developed during World War II was the U.S. army’s DUKW – more popularly known as the ‘Duck’. These amphibious vehicles were large, 2.5-ton trucks, capable of reaching 50 mph on land, and five knots in water.

Their versatility made them perfect for cross-country driving throughout Europe, and ducks were used extensively in the invasions of Sicily in July 1943 and Normandy in June 1944. The U.S. army was able to produce 20,000 of these vehicles, and many remain active today, used as tourist vehicles in cities such as San Francisco and Seattle. 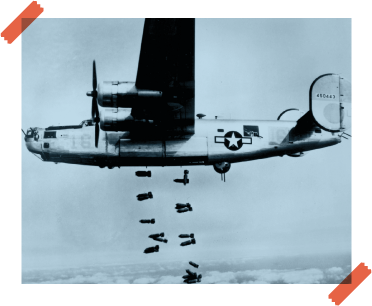 The war catalyzed vehicle production, as all of the competing forces sought to gain a competitive advantage through the development of new types of vehicles.

The speed element of WWII was crucial, and all countries ultimately attempting to design vehicles that were speedier and better able to increase the overall swiftness of their army’s movement. Despite the trend towards specialization, the most successful vehicles were the most adaptable, and often the simplest.

The jeep and the tank were war-changing developments because of their ability to do a variety of tasks exceptionally well. Furthermore, there was a certain quality to the quantity of production. Both the jeep and the T-34 tank were produced in huge numbers, ensuring that the battlefield was shaped by their presence.

In a war marked by the speed of the initial German assault, the Allied powers were able to turn the tide by producing faster, more nimble vehicles. The war was defined – and eventually won – by the successful use, not of power, but of speed.