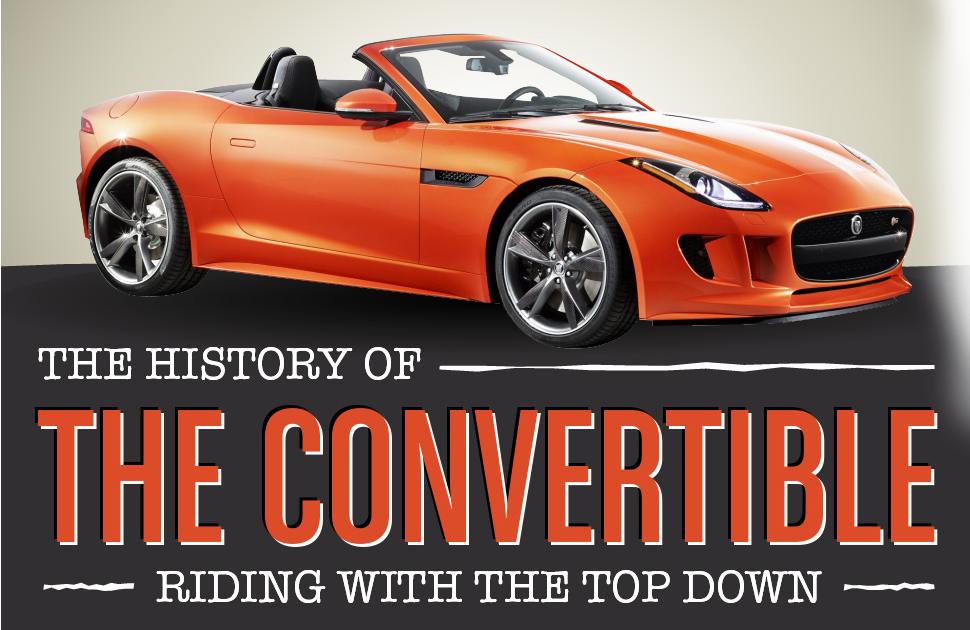 Everyone remembers their first ride in a convertible. Hitting the open road on a beautiful day with the top down and the wind blowing in your hair—it’s an experience that’s hard to forget.

Because of its fun-loving purpose, the stylish convertible has come to symbolize freedom

Whether it’s on a classic cross-country road trip or behind the wheel of a luxury sports car, driving a convertible is an iconic American pastime. The name “convertible” actually refers to the style of car with a convertible, top-down roof compared to other enclosed cab vehicles on the market. Convertible makes and models may vary by price and manufacturer. Early cars were built without tops based on a horse and carriage modification. The first closed vehicle was manufactured in 1910. Convertible modifications began just decades later in the first retractable hardtop system invented in 1922. The first power-operated retractable hardtop was produced by Peugeot in 1934; Chrysler manufactured their version of the hardtop convertible car in the 1941 Chrysler Thunderbolt.

The name for the convertible car is fairly self-explanatory

A car manufactured with a flexible roof that can be opened or closed before driving is a convertible. A convertible car may also be referred to as: Open-air convertible driving is a popular way to spend a lazy Sunday afternoon.

If you have ever seen a classic film featuring a stylish convertible driven on a road trip—think 1967’s Two for the Road starring Audrey Hepburn—then you may appreciate America’s love affair with the drop top car. Convertibles are classic collector’s items, as well as multifunctional vehicles that represent the laid-back lifestyle every man and woman craves.

How much do you know about the beloved convertible car?

Here are 10 intriguing facts about the roadster

A convertible is technically different from a roadster; a convertible car allows you to roll up the top and windows, while a roadster often has clip-in side curtains without a top permanently attached to the car body.

Hollywood stars have famously driven convertibles on the silver screen for decades, greatly contributing to their popularity

Convertible cars are frequently featured in local and national parades as transport for beauty queens, mayors, and even presidents.

The ragtop version of the standard Mini Cooper costs only $4500 extra.

Convertible safety has been questioned time and again due to rollover risk in an accident; however, modern convertibles are manufactured with improved safety features in handling and stability to drastically reduce rolling risk.

Jeeps offer a different convertible body style and feel, ideal for off-roading or a day at the beach; the 2008 Jeep Wrangler was priced at $19,680.

Today’s convertible comes in all shapes and sizes, makes and models, uses and purposes.

While you may prefer a trendy convertible as a status symbol, your neighbor may drive a compact city convertible for better gas mileage and easy urban parking. Convertibles also come as coast-to-coast cruisers preferred by road trippers, top-of-the-line collector’s vehicles, and modified sedans and coupes driven by families.

The Evolution of the Convertible In the early days of the automobile, every car was topless.

That is to say, all vehicles were built with an open top—without a windshield, roof, window glass, or doors. The perfect example of the pre-convertible can be found in the 1896 Ford Quadricycle. The Quadricycle was Henry Ford’s interpretation of a 19th century buggy based on the prototype of a horse-drawn carriage. Vehicle designs with fabric roofs emerged in the early 20th century; some cars were produced with rudimentary folding tops.

The true spirit of the convertible was born just a few decades later, based on the ingenious design of one Ben P. Ellerbeck: Convertibles of All Time

If you’re ready for a Sunday drive, you need the right convertible to complete the picture.

An investment in a convertible is money well spent, as both a lifestyle choice and mode of transportation. Here are 10 of the most impressive convertibles of all time for your inspiration:

Convertible styles and purposes are as unique as their driver

Because of their versatility and carefree nature, convertibles are a staple in American culture. Cruising, off-roading, zipping down the Pacific Coast Highway on a Sunday afternoon, and navigating metro traffic—you can count on a convertible to get you where you need to go in style.