How Do Car Engines Work?

If you’re thinking of buying a new car, perhaps one of the biggest questions you have to answer is whether to buy an electric vehicle or a gasoline-powered one.

A lot of us take our cars for granted and never give much about what’s going on under the hood. A modern gas engine in a car today operates the same way it has since the very beginning — with an internal combustion engine. So, how does a car engine work exactly? Let’s review a bit of history to learn what a car motor does.

Although the internal combustion engine did not truly supersede the steam engine until well into the nineteenth century, once it did, it began a revolution in transport. By 1876 the modern internal combustion engine was commercially available — designed by Nikolaus Otto, although heavily influenced by the work of Etienne Lenoir. It was this invention that allowed for the development of personal transport — most notably in the form of the car. Later inventions, such as the aircraft, also used a two or four-stroke engine.

Modern developments in engine technologies have resulted in the continuous combustion stroke engine, as used by jet and rocket engines. Furthermore, with the increasing move towards hybrid or electric cars, the engine is an ever-changing technology.

However, most automobiles across the world still use gasoline or other petroleum products as the fuel with which to create combustion.

What is a gasoline engine?

The most common type of engine in the world is the gasoline engine, as used in most privately-owned vehicles. Indeed, with the growing numbers of automobiles sold in the developing world, there are more gasoline engines globally. Which leads to the next question: What does an engine do? The gasoline engine functions by burning a mixture of gasoline from a fuel tank and the air it takes in from outside. Fuel injection mechanisms provide fuel to the cylinders. The combustion takes place in a metal cylinder, into which a cylinder slides and retreats.

The movement of the piston reduces the available volume in the cylinder for gases, which is essential for the function of the engine. It is the change in pressure as the piston moves, and then, by the expansion of the gases, drives the engine. The temperatures for car engines can range between 300 and 400 degrees Fahrenheit. The range of ideal temperatures is between 190 and 220.

The diagram below shows a cross-section of an internal combustion engine. A four-stroke engine will contain four of these sections, with pistons all offset from one another to ensure constant motion.

How a car engine works depends on four main stages:

In effect, the function of an internal combustion engine is to convert heat into work — or, to put it another way, to convert chemical energy into kinetic energy. The induction stage of the cycle begins when the crankshaft turns and pulls the piston down and out of the cylinder. The opening of a valve at the fuel and air inlet introduces both air and gasoline into the cylinder.

The movement of the piston is known as the intake stroke or the induction stroke. Once the piston is fully inserted into the cylinder and the space is as reduced as possible, the spark plug creates a spark to ignite the mixture. Once the fuel is ignited, the fuel and air mixture creates a large amount of heat in a short amount of time. This effectively functions in the same way as an explosion, as the resulting pressure causes the piston to powerfully move out of the cylinder.

This is what causes the power produced by the engine. In addition, the release of the piston turns the crankshaft, thus inserting the next piston along, and so on. In the final stage of how does an engine work, the burned gas (which is now fully mixed with the air) is vented through a valve, out of the cylinder, and out of the car’s exhaust pipe.

It’s important to note, though, that this mechanism does not apply to an electric car, which relies on a battery pack and is recharged through a power output.

What is the work of Crankshaft? A crankshaft is a rod with undulating, offset sections called throws. These throws are connected with the pistons in such a way that the upward and downward motion of their movement will rotate the crankshaft.

This is what gives the vehicle thrust (forward momentum) and what allows it to drive on the road. Naturally, because of the multiple steps in this process, a problem with any one individually will cause the car to stop working.

Thus, the entire engine must work in a sequential system. 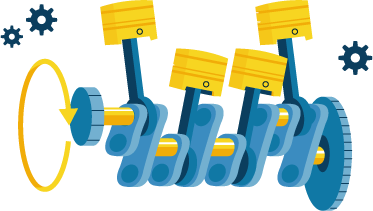 In a four-stroke engine, each of the cylinders is at one of the four stages at any given time — hence why the engine is continually moving forward. In many diesel engines, turbocharges and intercoolers increase overall efficiency. The job of the turbocharger is
to draw in exhaust air still containing energy and extract energy from it when it turns a small turbine. This turbine
is used to power a compressor before the air intake.

This greatly increases the overall efficiency of the engine by forcing the exhaust gases to complete one further task, which helps with the intake of gases at the beginning of the process. This compression means that the engine doesn’t have to work as hard, and can therefore run more efficiently.

How does a Diesel Engine Work?

In Europe, 54.9% of registered cars are diesel, compared with only 3% in the United States. Partially, this is due to the relative cost of gasoline for the consumer in both countries.

In Europe, where gasoline is relatively heavily taxed, diesel becomes proportionally more expensive.
In the United States, where gas prices are lower, diesel prices can be prohibitive.

However, developments in diesel engines have made them more efficient, and in some larger vehicles, such as buses or ships, diesel is the fuel of choice because of its relative efficiency.

In gasoline engines, the air and fuel are mixed before entering the cylinder. This makes compression more difficult. How diesel engines work, by contrast, is the engine compresses only the air, making the compression ratio much higher (i.e. it is easier to compress the volume of the cylinder using the piston). This means that they are more efficient. For example, the average thermodynamic efficiency of a diesel engine is around 45%, whereas a gasoline engine operates at around 30% efficiency. Diesel as a fuel also contains 11% more energy than an equivalent amount of gasoline, thus meaning that it is at an advantage when it comes to its use as a fuel.

Indeed, such is the relative power produced by a diesel engine that crankshafts have to be cast from a single piece of metal so as to avoid breaking under the strain of a piston’s movement. This means that, for long-distance trucks or buses, the ability of a diesel engine to produce more power, as well as generally being robust, makes it superior to a gasoline engine. In some cases, there are some gasoline elements. In general, however, technology is improving with regards to non-fossil fuel cells, meaning that hybrid cars are being replaced by all-electric vehicles. You can see this trend in our article about the 10 most popular electric vehicles. Regardless of the specific fuel used, there are two potential systems in use — parallel and series.

As a result of their parallel status, they require a smaller battery pack than series engines. One advantage that parallel systems have is that the gasoline engine can function as a generator to charge the battery when the demand for power is low. In parallel systems, the engine connects directly with the wheels. This is a more efficient system than in other configurations, meaning that hybrids with parallel systems are often the lowest-cost vehicles on the market to run. In addition, a parallel system can effectively switch between
the two different fuel types, meaning that in city driving (which tends to be more stop-and-go), they can favor the more efficient option (electric) and on highway travel, they can switch to
a gasoline engine.

Hybrid vehicles benefitted from a number of advances in battery technologies in the 1980s and 1990s that made them viable for use in cars but not yet capable of powering a car without an additional gasoline engine. However, with these developments, parallel systems are in danger of being rendered obsolete by series systems, which have advantages like having fewer intermediate stages, and benefit from ever-improving technology batteries — in terms of both power and storage.

The flow of energy is determined by a computer. In a series system, the use of regenerative braking recharges the battery pack. This means that when the driver takes their foot off the accelerator pedal, the car will use friction to recharge the battery, thus conserving energy. The model above shows a hybrid series system, where the gasoline provides the initial fuel cell. However, in cars such as the Tesla Model S (i.e. a non-hybrid electric vehicle) the entirety of the series consists of the final three stages (from the battery to transmission).

As battery technology develops — which was previously what limited this technology — costs have dropped and efficiency has increased. This means that electric vehicles are becoming ever more viable. As a result, the shift toward hybrid and fully electric vehicles can allow for cars (and personal transport in general) to remain a viable means of transport in the twenty-first century.